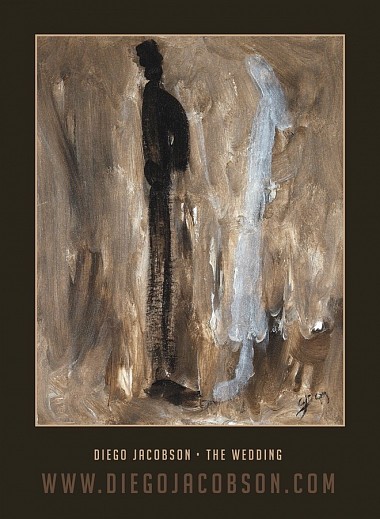 Excerpt from interview of Diego Jacobson with Mike Fitelson 2007

Excerpt from interview of Diego Jacobson with Mike Fitelson

Interview-  Just from what I observed last night and looking back through your catalogs, you have a pretty good set of techniques that you use.  And they’re very distinctive techniques as far as I can tell.  So, you’re using acrylic?

Jacobson- Mostly acrylic because I like to paint a lot and I like to paint fast.  I do paint with oils but oils take a very long time to dry, they smell very strong.  And when you produce a lot like I do it’s difficult to have a lot of paintings drying at the same time so it’s not really convenient to work with oils.  Although, I like the effect that comes out and I use the same techniques with oil than with the acrylic. But the majority is acrylic.

Interview- So you’ll squeeze out a bunch of dabs, and my sense is that you don’t have an idea of what you’re going to create yet, the only selection you’re making is your color choice.  And it looks like you’ve built up your color choices since you started.

Jacobson-  I can say that perhaps I have good taste of what mixes nicely together.  But that’s about the extent of what I bring to the paintings.  I am self-taught as a painter. It’s just an accumulation of techniques that I’ve taught myself.  And like I said, I paint a lot, I have a thousand paintings done.  And the important thing about that is that as you paint, the more you paint the more experience you have.  So if you have a painter which has done 10 paintings you have a lot less experience than he’s done 50, than if you have 500 or a thousand.  So I packed a lot of experience into my 7 years of painting like a painter that’s been painting for 30 years  and I taught myself different techniques and I learn from that.  Sometimes I get to a point where I don’t like the painting yet and I just start changing my technique, instead of brush a spatula gets a totally different effect.

Interview- When you start from the very beginning and you’re squeezing out your colors, do you choose those colors based on a particular mood you’re feeling at that moment?

Is that tied to a particular sense of a type of a painting that you want to produce that’s coming from within you?

Jacobson-  Not consciously.  Consciously what I try to do is that I try to produce a different painting every time.  I don’t like to produce the same thing over again. I choose my colors based on frequency, the energy that the color has. It’s very instinctual. So consciously if I’ve done a red painting I try to do a blue painting or a green painting or an ochre painting.  Sometimes I make a painting where I mix colors that don’t obviously fit together.  It’s a challenge and I enjoy resolving the challenge by continuing to work the painting, adding other colors, whatever.  Some paintings are easier than others because of what I have selected as my colors.

Interview- So you have the colors out and your beginning, your initiation for each painting is to try and create something new.  Not necessarily a landscape or a face or whatever, something new, right?  I’m going to select this size canvass these particular colors and I’m going to endeavor not make this one or this one or the next one in the line.  Where does the technique come in?  I noted about three or four techniques you seem to have been using for 7 years or so but a few new things are being introduced.

Jacobson-  For example, one of the new things I started to do in 2005 was I started to do drip paintings and that came about  because I just happened to have a fluid paint, its acrylic but it comes in a container like a  ketchup bottle.  And I put the paint on the canvas the way I usually do just to mix it but this time I squirted it onto the canvas. I way in tending to continue adding other colors,  but then I looked at and I said, “that’s interesting, that would be bold just to leave it that way”.  And it’s a painting; it’s called ‘Preying Mantis’, 2005. That was my first drip painting and I left it just to be bold.

But people liked it and I started to do more and more I started to play with that technique adding other colors and more techniques until I incorporated drip paint into my language of abstraction. It’s more difficult for me.  It takes away my ability to flow with brush or spatula.  Once you drip it onto the canvas it’s there, you know and you either totally mix it together or you leave it the way it is.

It’s kind of like drawing because you have to think about where you’re going to put the paint before hand because if not, you’re going to have a totally different painting.  So later I started to modify that technique.  I started to drip the paint but then to spread it so I created a new technique.  When I come up with a technique its usually by accident, and I start playing with it and seeing what comes out of it.

Interview-  One of the more established techniques that I saw throughout your work in the catalogs was this effect that you get where it almost looks like you’re blurring something, intentionally blurring something like Richter.  I think what I saw in the catalog when it caught my eye when I saw it last night was how are you achieving that effect?

Jacobson-  That’s basically with a spatula, you kind of mix it together.  It’s interesting because if somebody else tries to do the same thing they most likely get brown.  It’s not easy to do but yet it just comes out.  Really its just spatula.

Interview-  How did you discover that technique?

Jacobson- Um, I started that in 2001.  With a painting which is called “Infinite wisdom”.  It’s a yellow painting with red.  And I really was just playing with it.  One of the techniques which I initially learned from the Paul McCartney interview, which I told you about earlier, when he gets blocked with a painting, that he tries just to fill the canvas, what he called ‘kill the canvas’ and take it from there.  So I tried to do that, but in this particular case I did it with a spatula instead of with a paint brush but I got a very interesting effect. What I like about this effect is that when I do it, many, many times things appear in that.  Different things appear in the so-called “Jacobson effect”. That what some critics have called it.

I like the magical part of it I like the fact that it’s magic.  It is magic when it’s like that, it allows for spirit to come through me and on to the canvas.  It’s as if I’m channeling what I’m doing, because I can’t do it consciously.  But yet when I play with it and just allow myself to be free and follow my instinct, stuff appears.  Trust is a big part.